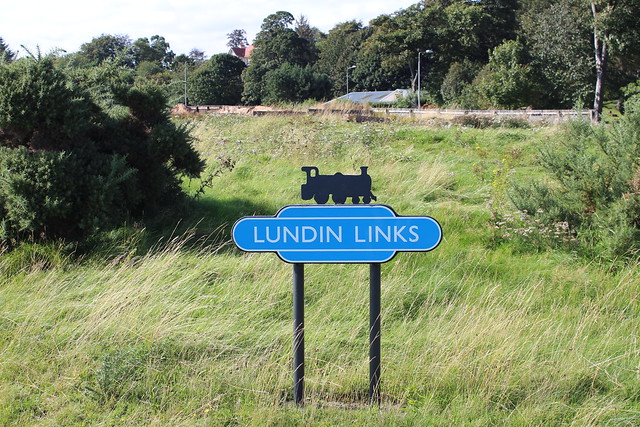 A sign near the 17th hole, named "Station" memorializes the spot where a now defunct train line used to run through the Lundin Links

On all my trips I always like to include a course that flies below the radar. I do this for two reasons. First, I never know when I will discover a hidden gem that will catch my fancy. And second, so I can immerse myself in the history of the game. Lundin Golf Club made the cut for a couple of key reasons: it is only 30 minutes outside St. Andrews; it was designed by Old Tom Morris and since we don't get to play his courses in the United States, I make it a point of playing some during my travels. And, finally, it has a hole that provided inspiration to Charles Blair Macdonald when he designed the National Golf Links of America.

Lundin Links is a private club but they welcome visitors. 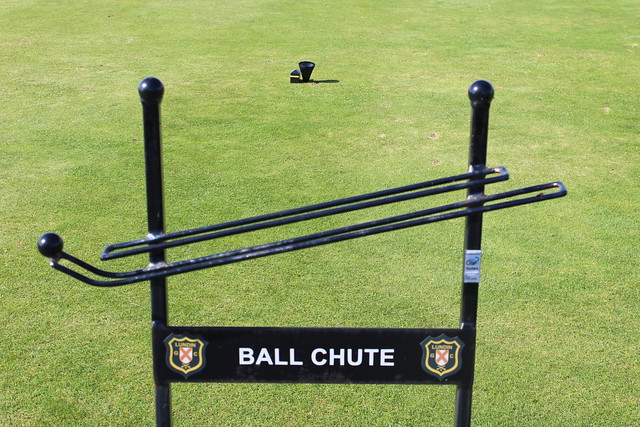 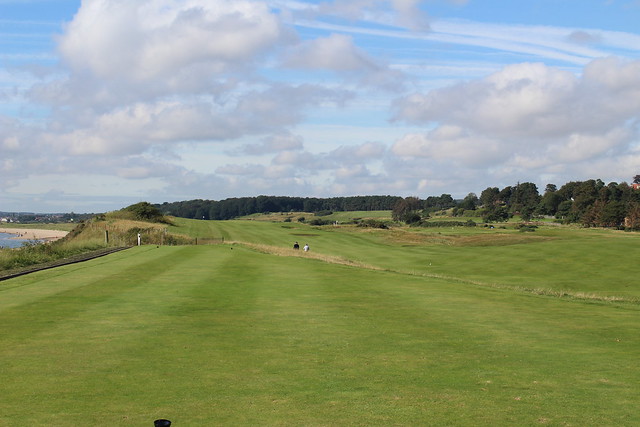 
The course features a relatively difficult first hole, at 420 yards, with an elevated green. The setting is ideal to get the golfer into the mood of links golf with beautiful views and broad vistas. 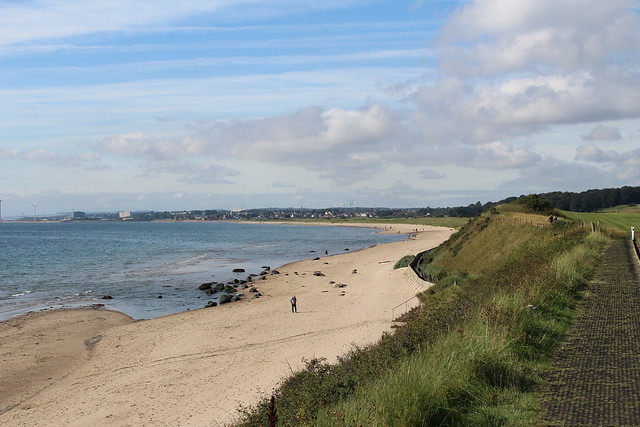 Luckily for us, on the day we played the wind turbines visible off shore were still! 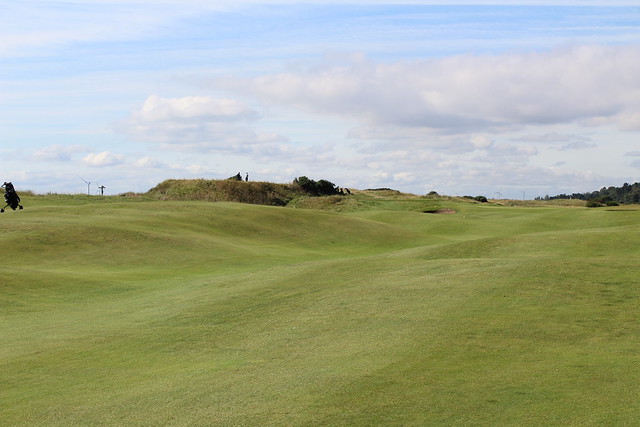 
Lundin Links sits immediately adjacent to another Old Tom Morris links course, Leven Links. When the courses were built in the 19th century (1868) they were one course called Interleven, a classic out and back layout. They were split up in 1909 by James Braid, with half the original links holes going to Leven and the other half remaining at Lundin. The Braid holes play away from the seaside and up a hill and have a different character than the original holes. The original holes are better because they feature more natural movement in the land, the shape of the tousled, crumpled fairways being more pronounced. 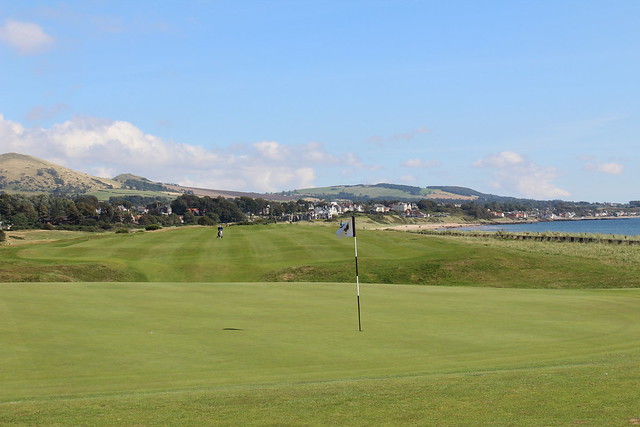 The 4th looking backward from the green shows the hidden swale that cuts in front, shafting the uninitiated golfer or the shot topper

There are several defining characteristics to Lundin Links, specifically burns invisible to the golfer from the tee and on approach shots; and, ravines cutting across the course. The fourth hole, above is a good example. The other defining characteristic is blind shots, a trait of Old Tom Morris courses in the same way that railroad ties define those of Pete Dye. 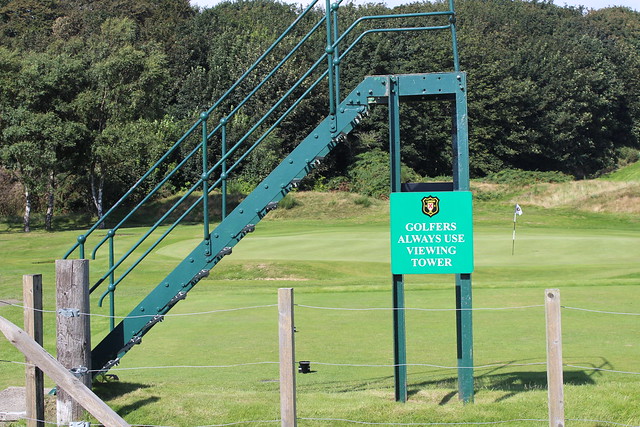 
The sixth tee has a ladder where the confused golfer can climb to see where they are hitting (and to make sure they don't hit into the group ahead). The next hole, the seventh, also has a ladder and features another blind tee shot over a distant sand dune.

The other moving hazard the course has is hikers. Coastal walking paths traverse the course in a couple of spots so you have to be on the lookout for people wearing boots and backpacks traipsing through and across a couple of holes. 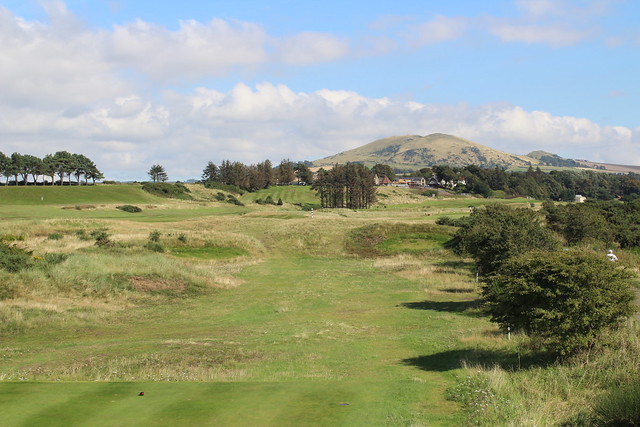 The view from the ladder on the 6th tee. Hit your tee shot over the striped pole and you'll be pleased 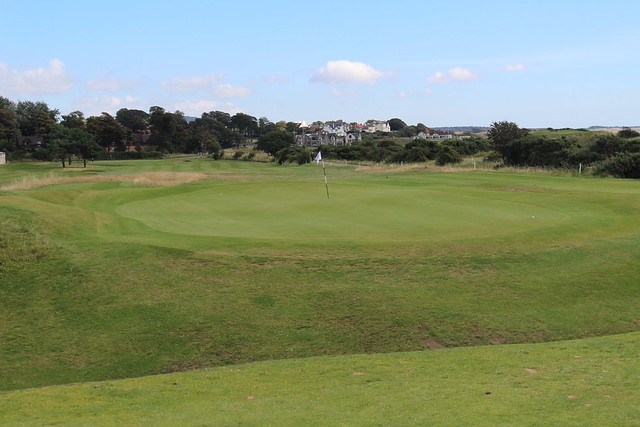 The 7th green is characteristic of many on the course. Round and relatively small.


Our group didn't find the greens to be particularly difficult, most are relatively flat and round. We did find the course's two par fives to be challenging. At 555 yards and 499 yards both played into the wind. 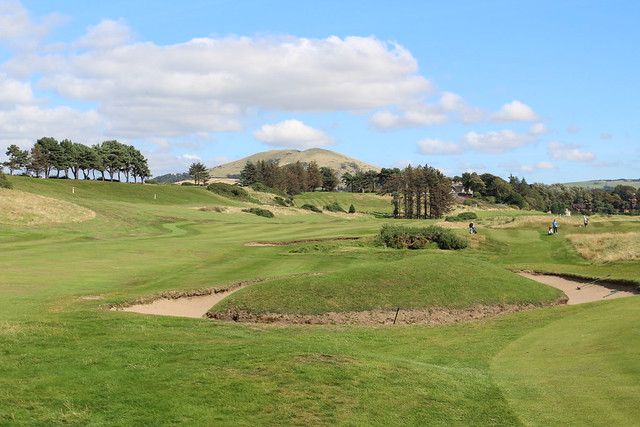 
My favorite hole on the course was the short tenth, named "Thorn Tree." The hole is only 352 yards long but you really don't see the green until you are essentially on it. The green is set off at an angle to the left of the fairway and is blocked by a mound with a circular bunker. Although I am no arborist, it looked to me that the other hazard blocking the green atop a hillock further up is a gorse bush rather than a thorn tree.

Since I have ADHD and like to repeat things, I'm showing three different views of the 10th so you can get a better feel for how it looks and plays. 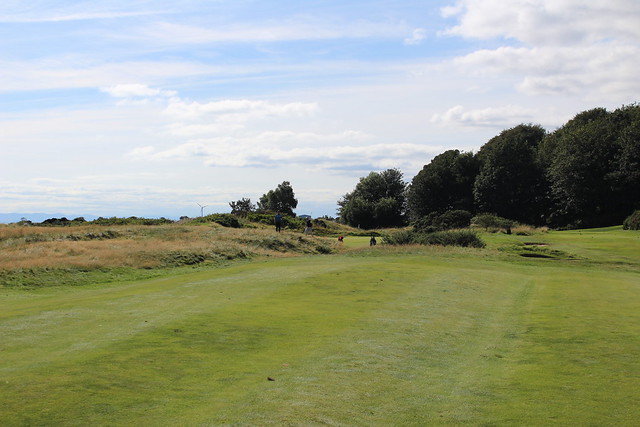 The tenth as seen from the golfer's second shot. It still offers no clue as to the size or shape of the green 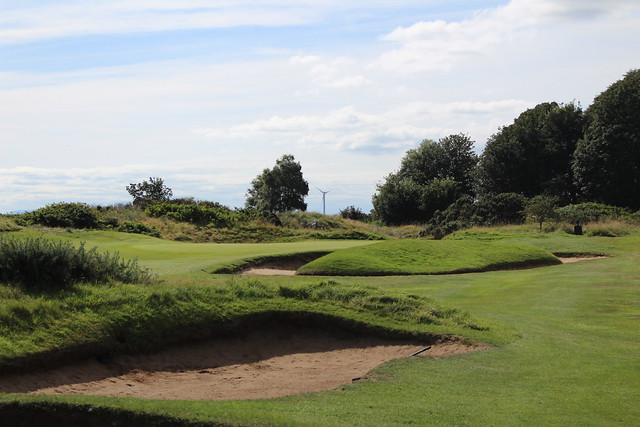 The tenth as you get close, with the bunkers and bushes blocking the view

Charles Blair Macdonald attended St. Andrews University about twelve miles north of Lundin, on the opposite side of the peninsula. When he designed the National Golf Links in Southampton he took inspiration from various holes that he was impressed with when traveling throughout the British Isles. One of my favorite holes at the National is the 17th, a short par 4 risk-reward hole that plays down hill with bunkers crossing in front, although not immediately next to the green. His inspiration for the hole was the 16th at Lundin Links, named "Trows." 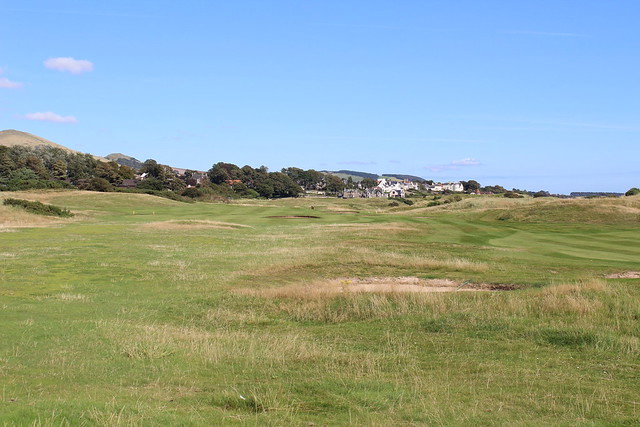 View of the 16th hole at Lundin Links as seen from the tee. The green is set behind the smallish hill to the left.


I found the hole to be more than mildly disappointing. The only real similarity is that it is short, at 311 yards. Other than that it shares no characteristics with the 16th at the National Golf Links. The green here is blind and at the National it is not. The tee shot I suppose offers some risk-reward characteristics here, although not really. There is no change in elevation and no hazard crossing in front of the green. I was confused after playing the hole so went back to consult the bible on Charles Blair Macdonald, George Bahto's The Evangelist of Golf. Bahto describes the prototype hole "Leven" (remember when Macdonald played the course it was Interleven, thus the naming confusion), as having a fairway bunker or waste area that challenges the golfer to make a heroic carry for an open approach to the green. I guess in this context, at Lundin, that means keeping your ball right off the tee to avoid one bunker. He also notes that the green surface is usually a moderately undulating surface with the least accessible cup placement behind a sand hill. Certainly that exits here. But it doesn't on the National's Leven hole. Okay, what did I miss? 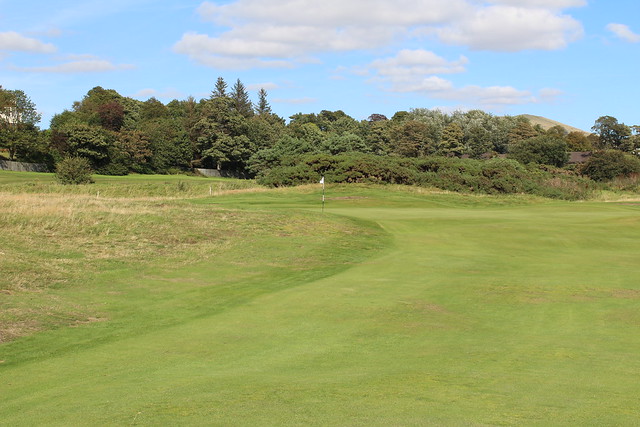 The approach to the 16th green doesn't really cause much stress 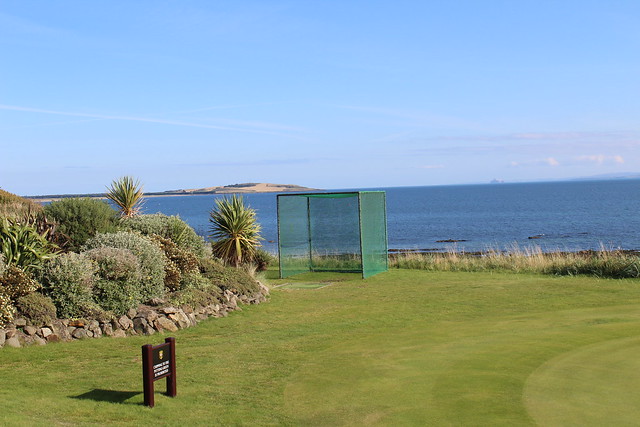 The fantastic driving range at Lundin Links, quite the view

Almost no golf courses in the British Isles have driving ranges. One of the quirks of playing here is that you just go out and play without any real warm up like we would have in the U.S. Sitting just outside the clubhouse, this green caged beauty is available to hit a couple of shots into before your round. You've got to love it.

I very much enjoyed my day at Lundin. They are welcoming to visitors, the greens fees are reasonable and the members we spoke to after the round in the clubhouse while having pickle and cheese sandwiches are rightly proud of their course and its heritage.