Is it worth going out of your way to play a nine holer not located near other clubs that are destination golf courses? For example, it is easy to play all the great courses in Surrey (Sunningdale, Wentworth, St. George's Hill, Walton Heath) because you can stay in London and get to the courses with little stress. Same for the courses around Liverpool (Lytham and St. Annes, Royal Liverpool and Birkdale). What about a course located 30 minutes outside Cambridge, in Suffolk?

For me the answer was yes because I always wanted to see Cambridge and visiting the Royal Worlington and Newmarket Golf Club (also known as Mildenhall) gave me the excuse to do so. I have visited Oxford before and loved it, so visiting the other great university of the world was a no brainer. Like Oxford, Cambridge was also love at first sight, one of the prettiest cities I have visited, although most of its splendor is hidden in the courtyards under the arches, behind the building facades and through the loggia. 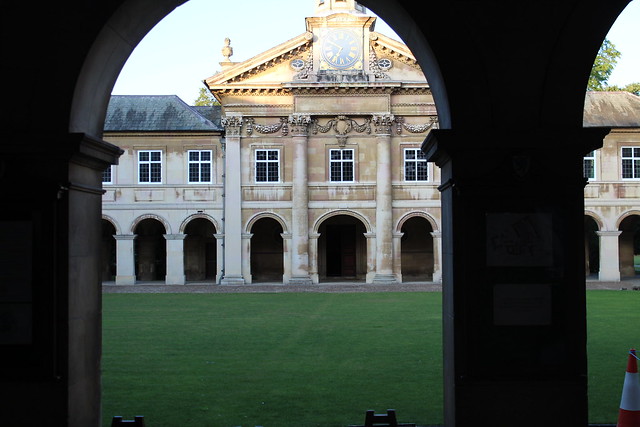 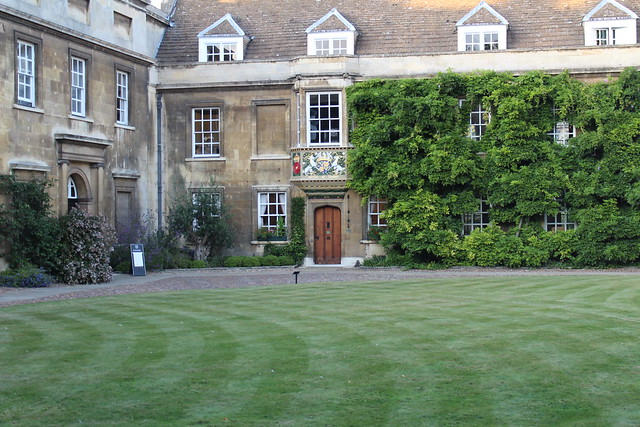 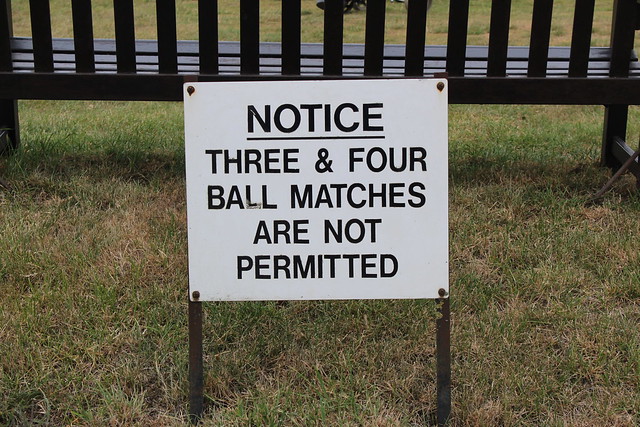 The rules of the game at Royal Worlington, where fast paced play is a priority


I am an avid reader of golf books and it's amazing how many of the best writers--including the three greatest ever to write about the game--went to Cambridge, and played at Royal Worlington, only adding to my desire to tee it up at the historic course. When Bernard Darwin, Herbert Warren Wind, and Henry Longhurst sing the praises of a course, golfers should take note. Specifically, all three masters of their trade wrote eloquently about the fifth hole, one that is world renowned for its difficulty. It was with much anticipation that we set out to play, anticipating how each of us would tackle the testing par three. After all, how hard can a 154 yard hole without bunkers be? 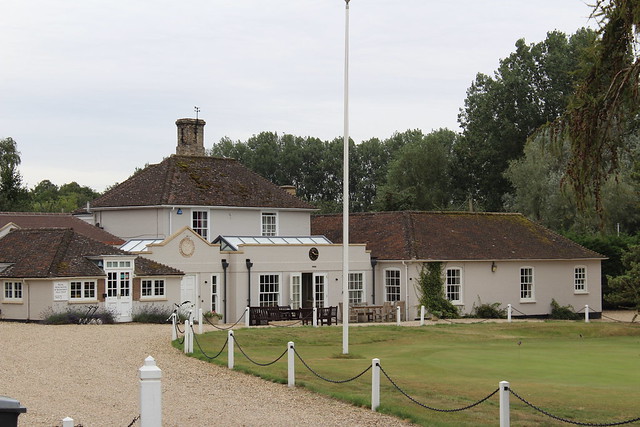 Modesty is the order of the day at Royal Worlington and Newmarket, a club that received its Royal patronage from Queen Victoria two years after its founding, in 1895 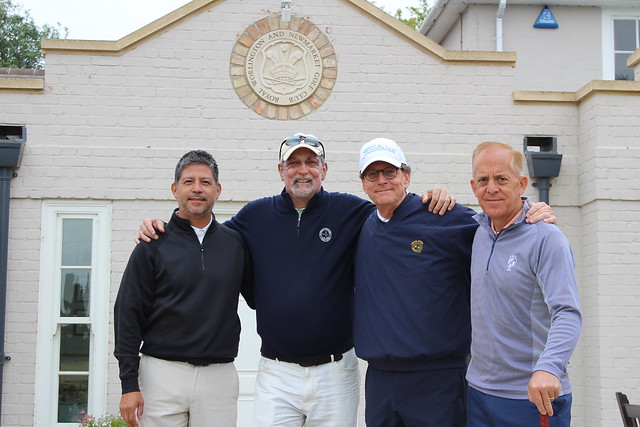 The foursome ready to begin their high stakes match

American golfers rarely play anything but their own ball. Playing Royal Worlington gave us the chance to play a foursome match (alternate shot), and it is a tradition worth keeping alive, and it fact reviving, so that it is done more. Aside from being a lot of fun, the other beauty of it is that you can play nine holes easily in 90 minutes, or three hours for a full eighteen. 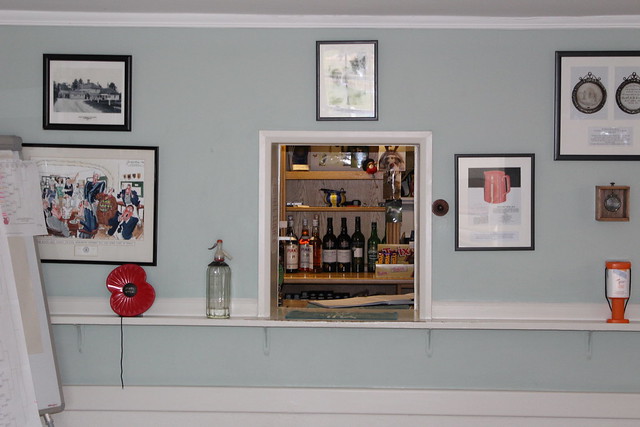 A club employee with good cheer magically appears at the cubbyhole in the clubhouse when you pay your greens fee, need some toasted sandwiches, or a drink 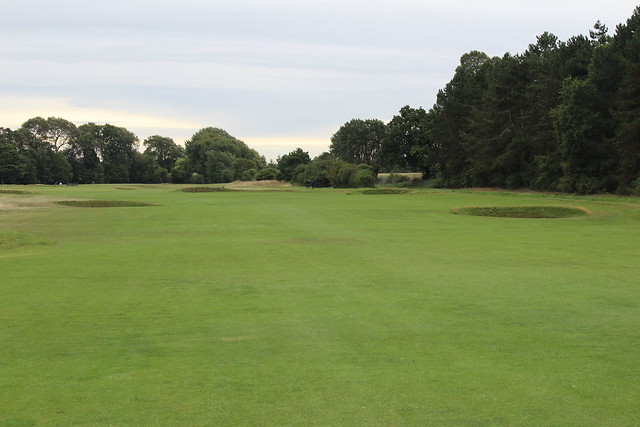 Most new courses built today are described by the architect or the owner as something along the lines of "the greatest piece of property we have ever seen," or "this land was destined to be a golf course." Whether it is just pre-marketing hype or the truth we each have to decide when we play the course. No such claim was ever made about Royal Worlington. The course is built on very flat land, although, as the affable Secretary explained to us, it is sandy soil and thus is ideally suited for playing all year 'round. The first hole, pictured above, shows the flat nature of the terrain. Tee to green the course is reasonably easy, the real challenge begins near and on the greens. Many of the greens have swales in front and contain false fronts. The putting surfaces are anything but flat, allowing the course to fight back against low scoring. 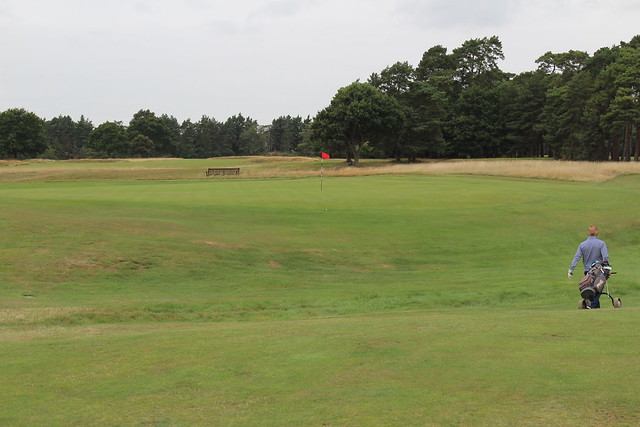 The third green, the perfect example of golf at Worlington. Doesn't look like much, but it is, with the swale in front and an exasperating putting surface


[Cambridge is the name of the University. It is made up of 31 separate 'colleges' which provide students their residence and administer their education. I have indicated which college each of the graduates attended.]

Herb Wind (Jesus College, '39) describes the third hole as having, ". . . a bowler-hat green, it rises from the fairway at a gentle angle and sweeps up on all sides to a flattish crown, on which the pin is almost always positioned."

The course has many idiosyncrasies, being squeezed into just 40 acres. One of them is tee boxes that play over the green you just completed. For example, the third tee shot plays over the second green several feet away. The sixth tee also plays over the fifth green. The fifth tee shot is the quirkiest of them all. To reach the green with a mid-iron you have to hit over not only the fourth fairway, but also the sixth.

Our match proceeded apace and we got into the gentle flow of the course, with many shots being thrown away around the greens, another joy of match play, because when it looks like you are seemingly out of the hole off the tee, unexpected shots happen that bring you back in. 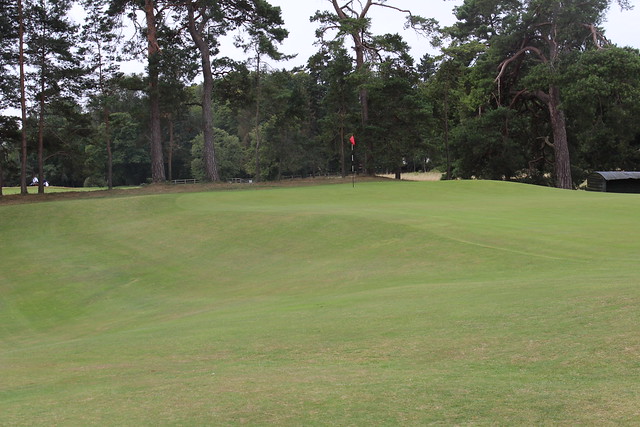 The fifth green as seen from the left side


Finally, our match proceeded to the 5th, a gem with a long narrow green that falls off both to the left and to the right. The fall off to the left goes into a large hollow with a steep incline back up to the putting surface. The right side features its own plunge, but this time instead of a hollow, there is a small stream that you don't see off the tee. Precision is the order of the day. 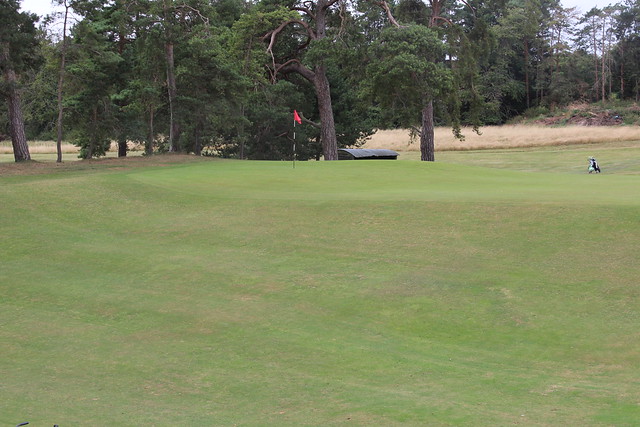 Luckily, my playing partner, whose handicap is 10 digits lower than mine, hit the tee shot and landed on the front of the green. Although as we all learned, being on the putting surface means nothing in relation to what you are likely to take as your final score. Our opponents (single digit handicaps) were not so lucky and hit to the right of the green. 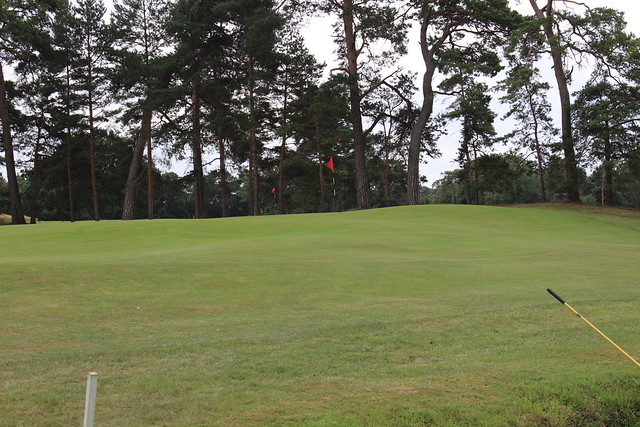 
We won the hole with a four as our opponents chipped back and forth over the green! They would have their revenge during our second round in the afternoon when I actually putted off the green. I hit what I thought was a good firm putt up the hill, but it caught a ridge at the wrong angle and rolled down off the top of the green to the right. A couple of wedge shots later, with balls returning to our feet, and we lost the hole going down in flames. Golf writer and architect Donald Steel (Christ's College, '60) describes the fifth using a gymnastics analogy, which is never a good thing. His summary of the putting surface as being shaped like a vaulting horse is spot on. It is devilish. 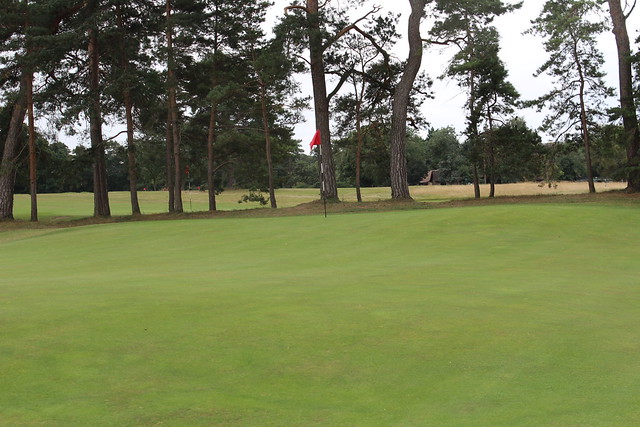 Wind described the fifth as "exceedingly lean and falls away abruptly on both sides - on the right, to a stream, and, on the left, to a basin of thatchy rough, twenty feet below the green, called Mug's hole."

Henry Longhurst (Clare College, '31) wrote about the card wrecker in a disconcerting manner, "A diabolically narrow green sloping sharply away on both sides and the green itself like the dome of glass in a fairy tale. The flag sits on a little elevated 'postage stamp' section of the green, guarded within a few yards at the back by a row of firs. On the right the ground falls away to the rough, and, for a good high slice, a side stream. On the left it falls straight away to a deep grassy pit, and many is the man who, alternatively fluffing his pitch and watching the ball roll ignominiously back, and then, determined to be up, hitting it over the green and down the other side, has passed to and fro half a dozen times."

Bernard Darwin (Trinity College, '97): "To reach the green is one distinct feat; to hole out in two putts, when one has got there, is another." 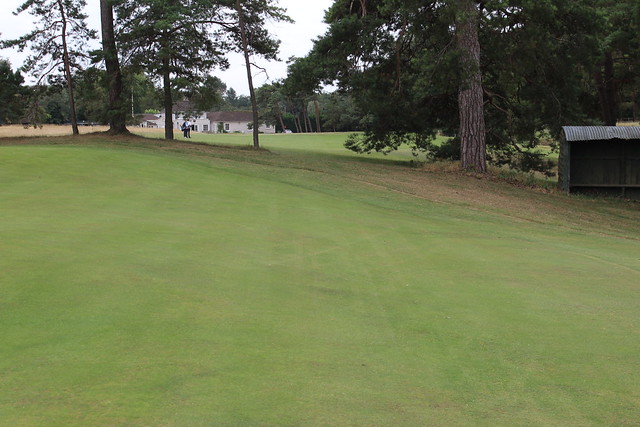 The sloping right of the green


Another Cambridge Blue, the poet Patric Dickinson (St. Catharine's College, '35), describes the fifth in his book, A Round of Golf Courses, in a pithy and poetic style that conjures up the appropriately fearsome image in the golfer's mind: "If you go right, or left, we will leave you ping-ponging away for a 6; for we have to hit the perfect tee shot . . . It is like pitching on a policeman's helmet." 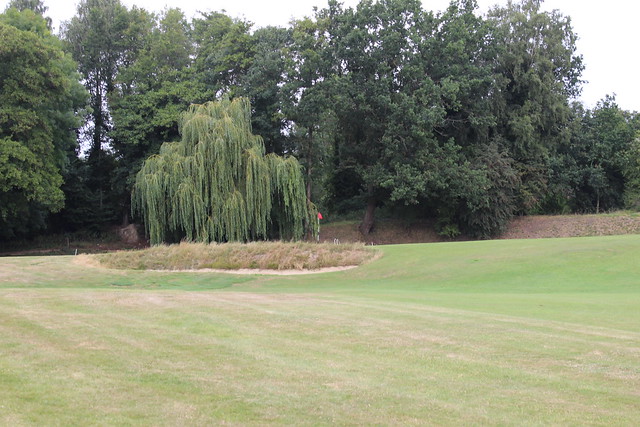 The fifth green as seen from the left side 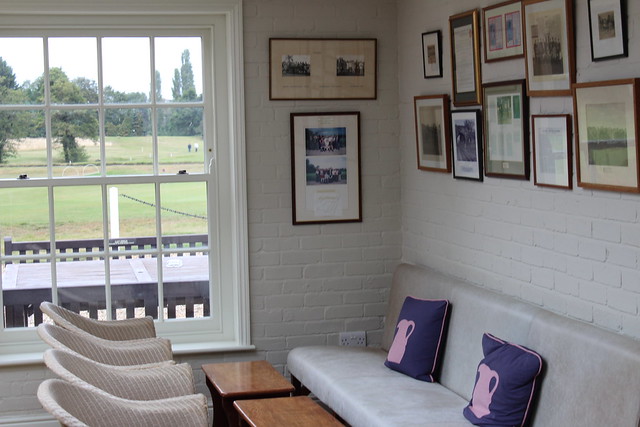 Darwin dubbed Royal Worlington "The Sacred Nine" after the nine muses of Greek mythology and called it the finest nine-hole course in the country. For me, the course will always have a special place in my heart because after 22 months of fatigue it was the first time I was able to walk eighteen holes as I recovered from my health problems. Although I had taken carts (buggies as the Brits call them) during the first two courses visited on this trip, I was finally feeling good enough to walk the course unaided. Apparently, it was in God's plan for me to hit my stride at Worlington. The Sacred Nine indeed. 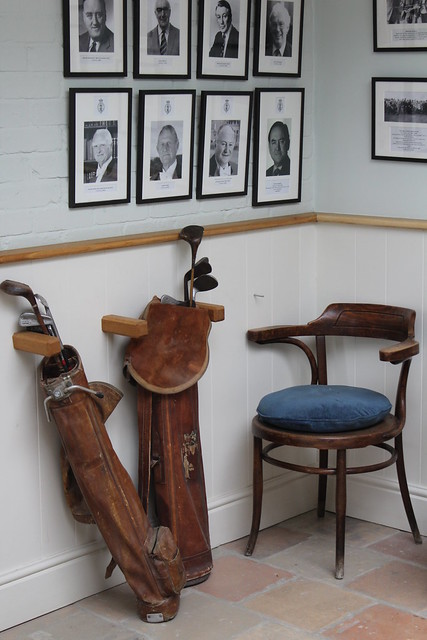 The clubhouse is the best kind: intimate and cozy

The club Secretary told us before we went out (tongue in cheek I think, but maybe not), that the second nine was the harder of the two. I think he meant that ignorance is bliss and that when you don't know where the hazards are you can swing more freely. We did find it harder going around again because we tried to avoid (largely unsuccessfully) what we knew were penal places on the course. Dickinson sums up the course with elegant prose, "Mildenhall's nine diamonds need playing; need all the cutter's art to become brilliants--make no mistake, they have as many facets, highlights and angles as any diamond, and they are quite as hard."

I'm putting my neck on the line recommending Royal Worlington because not everyone will appreciate its charms or the historical context that the course has. The conditioning is not great, the land is flat, and there are no beautiful vistas. Nevertheless, those that appreciate the finer nuances of the game will appreciate Royal Worlington. It was worth going out of the way to play.

The British are rightly proud of their quirks and traditions. Royal Worlington is a keeper of those traditions. Longhurst said, "The charm of Mildenhall, both the course and the club, was the continuity. Day after day one went out from Cambridge and found it the same. Year after year one returned later, and it was the same." As the song says, "There'll Always Be an England." Royal Worlington is one of the standard-bearers for the cause and we should all be grateful for that.
Top 100 Golfer at 10:49 AM
Share