Looking back over great courses that I've played but never written about, The Mid Ocean Club tops the list. This post corrects the oversight and hopefully will add some winter cheer.


In his, um, not so modest autobiography, Scotland's Gift, Charles Blair Macdonald gushed about the Mid Ocean Club, "I can assure my golfing friends, a more fascinating, more picturesque course than the Mid-Ocean when completed, will not be found in a pilgrimage around the world. There is nothing commonplace about it." 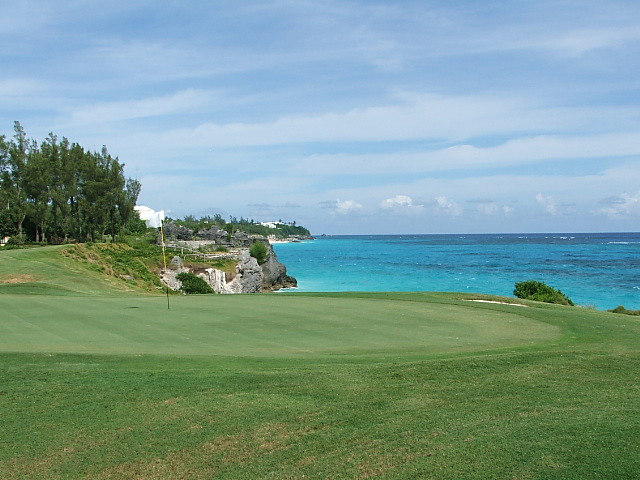 The view from the third green at Mid Ocean Club, a testing par three along the Ocean. A hook for the right hand golfer is in the Atlantic. Mid Ocean is the perfect place to play when there is snow on the greens in Northern climates.


Macdonald was attracted to Bermuda because of Prohibition; a number of his friends went there so they could consume liquor, providing an excuse for him to visit. The strong willed golf pioneer picked an idyllic spot on the isolated island, an area called Tuckerstown, which contains, "delightful valleys winding through coral hills." Macdonald brought in his whole team to aid in the club's design and construction including Seth Raynor, Charles Banks, and landscape architect Frederick Law Olmsted.

Completed in 1924, ironically, after Prohibition was repealed, the course was built on dramatic land set on a headland with sweeping views of the startlingly clear blue waters of the Atlantic all around. The challenge for the architects was that the soil is less than ideal for golf: solid coral rock being as difficult a surface as there is to build on.

Like its designer, the Mid Ocean Club is big and bold, built on a scale that most golf courses never achieve, the only two remotely close being Yale and Bethpage Black. Partially, I suppose this is because the course was built before the era of mechanized earth moving equipment, thus, Macdonald used the naturally hilly terrain to great advantage.

The course contains many Macdonald-Raynor prototype holes, including an Eden (the 3rd), a Short (the 7th), a Biarritz (the 13th), a Leven (the 14th), a Punchbowl (the 15th) and a Redan (the 17th). It meanders through various valleys and depressions, playing quite steeply at times. A good example is the 4th hole, below, named "Mangrove," the double-tiered green playing at a high elevation from the rolling fairway, making the approach shot blind. 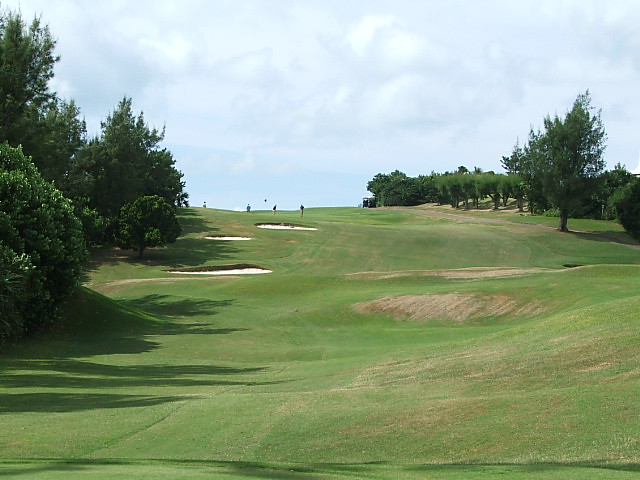 
The short (330-yard) par four 4th plays from an elevated tee with the Atlantic at your back and doglegs to the left. Although short, the hole is not easy.  Pat Ward-Thomas describes it in The World Atlas of Golf as "A plunge-and-rise affair, narrow between the trees and not altogether appealing." 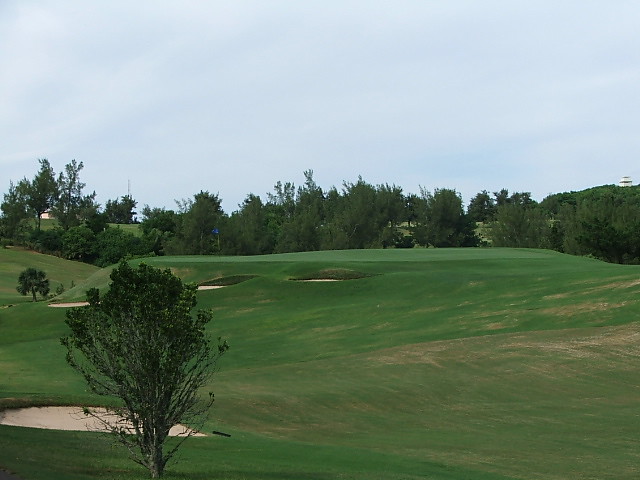 The short par 4 eighth hole highlights the theme of using elevation in the terrain throughout the design, with a green elevated far above the fairway


The 8th hole plays to an elevated green and from the white tees is only 316 yards, making it driveable if downwind for long and accurate hitters. The course is also quite lush, which should be no surprise as it sits in a tropical location. As Macdonald noted, " . . . it is well wooded with cedars, oleanders, bougainvilleas and hibiscus, lending the most fascinating color scheme on the whole." 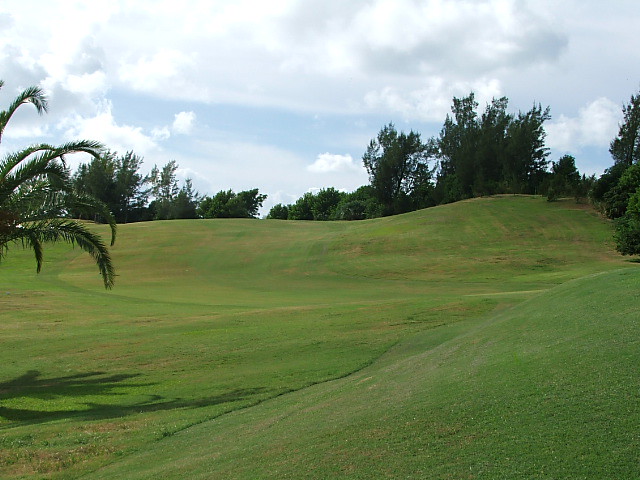 The tenth hole, "Mercer Hill", has unforgiving terrain requiring skill hitting off Bermuda grass on an uneven fairway over a steep hill!

Part of the challenge at Mid Ocean, aside from navigating the hilly terrain, uneven lies, and testing greens, is the wind. Situated in the middle of the Atlantic and subject to the trade winds, most of the year the prevailing breezes average 10 miles per hour and spike up to about 13 miles per hour during the winter. Doesn't sound so bad, although, as we know, averages can be deceiving, and as an unprotected island there are times when the wind howls and the test of golf is stern. 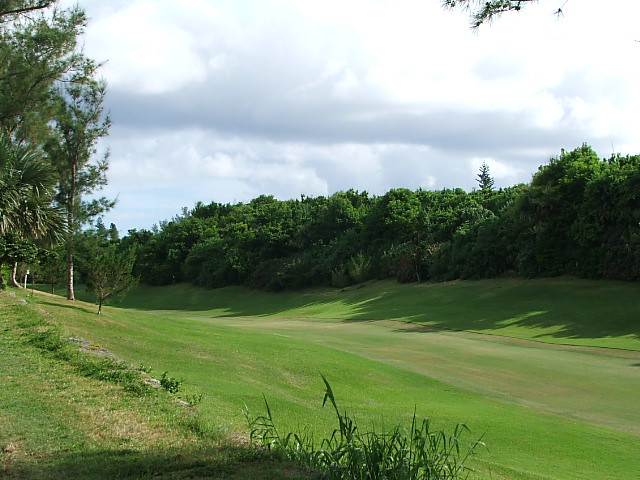 The par five 11th is routed through a small, isolated valley and reminded me a bit of playing through the bush at Durban Country Club in South Africa

At 451 yards the 11th isn't too demanding a hole on paper, provided you keep the ball in the slim fairway and play the dog-leg left smartly, not being too greedy by trying to find a shortcut to the green around the curving valley. The green is elevated and tricky, falling away on all sides. The 11th is a good example of how Mid Ocean was designed, routing through several small valleys and around rolling hills and plateaus. 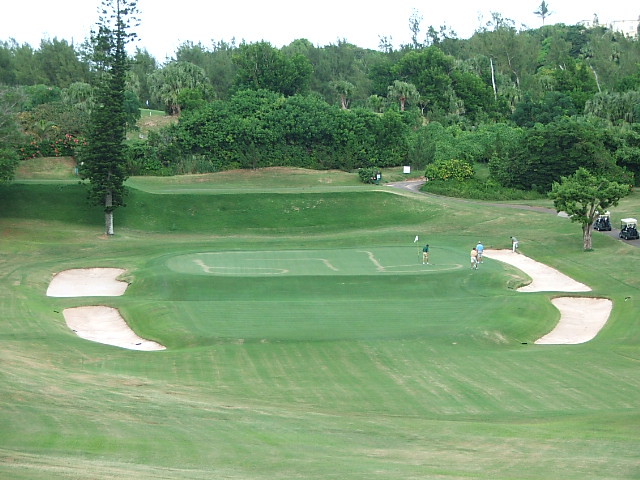 The 238-yard Biarritz hole, the 13th, is a testing specimen of this hole type, with the requisite hollow in the middle of the large green 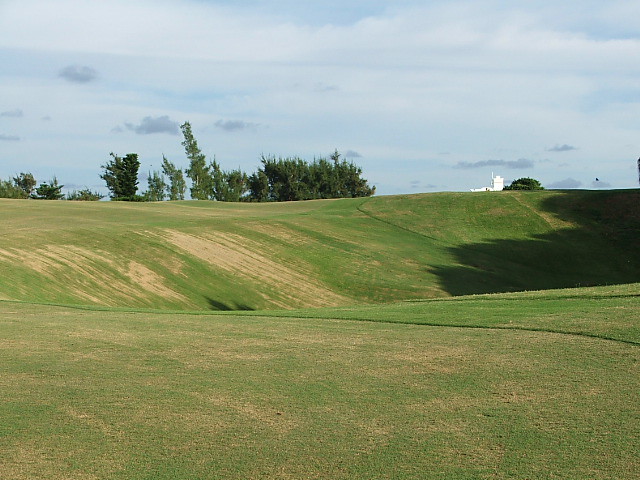 The par four 16th hole, after you hit over the sheer wall, then into a gully on the right side of the hole

I found the 16th to be a very difficult hole, and disorienting. The tee shot is blind, then, if you land in what is pictured above on the right side, you've pretty much thrown away a chance of par. The green slopes back to front and the green is ringed by bunkers all the way around. It's a great example of a hole that probably would be softened if built today with our ability to shape terrain at will, which Macdonald and Raynor didn't have the luxury of doing. Macdonald was cognizant of the fact that it would be difficult to route the course so that there wouldn't be too much "mountain climbing." He felt that he largely achieved it, with the notable exception being the sixteenth, which he called a "real climb." I'm with him on that. The 376 yard hole left me feeling like I do when taking a red-eye. In theory, it should be an opportunity for some respite on the way in, but I got so anxious that I didn't take advantage of it and walked off disappointed, a bit worn out and needing a nap. 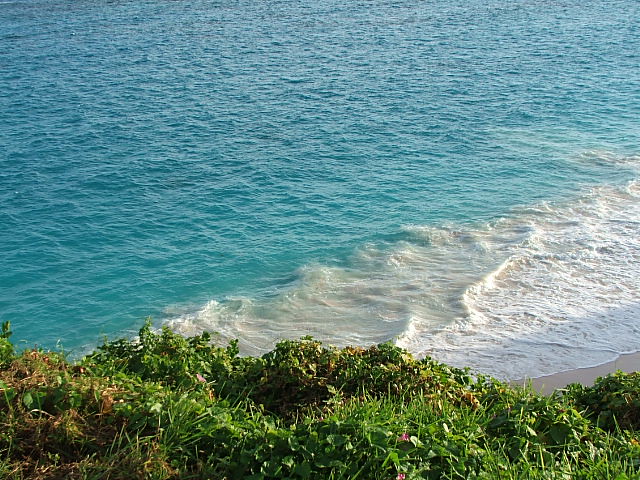 The view of the turquoise waters from the elevated 18th tee box, with the aquamarine waters of the ocean rolling nearby as you play at the edge of a cliff

The 5th at Mid Ocean, the infamous "Cape" Hole

The most memorable hole on the course is the vaunted 5th, the “Cape" hole which plays from a high tee, over water, to a demanding green. A Macdonald invention that has been widely imitated in golf design ever since, the Cape hole here is the best rendition in the world. What makes it so is that it plays from such an elevated tee, and the fairway that you have to hit slants downhill towards the hole from top to bottom the entire way. Most copies of the hole replicate the risk-reward options over water to an angled fairway, but most play on flat terrain. It is the size and scale of the commanding hill that the tee sits upon at Mid Ocean that sets this Cape hole apart.

The trick, obviously, is to choose how much of Mangrove Lake you want to take on. Aiming left is a bold line and if you can carry your tee shot over the lake you have a much shorter shot to the green. The more timid player aims right and finds land instead of water, but has a very challenging second (and possibly third) shot on the 433-yard hole. It is classic. A prolific gambler and long ball hitter, Babe Ruth bet he could drive the green from the tee. After eleven balls (his entire stash) landed in the lake he walked off the course in a huff. The hole lives up to all its hype and is very good. Macdonald built his home in Bermuda overlooking the Cape Hole. 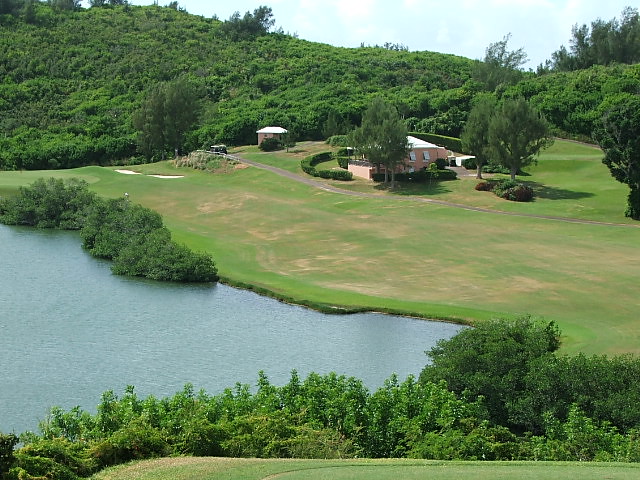 The "Cape" hole from the tee 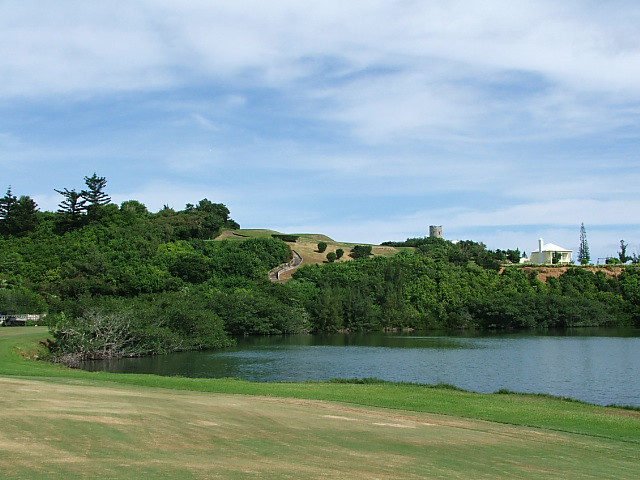 The Cape hole looking backward up the hill from the fairway 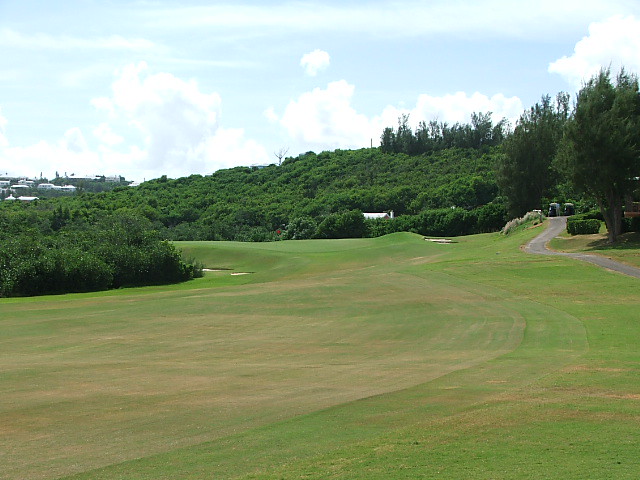 The approach shot to the elevated green on the Cape hole 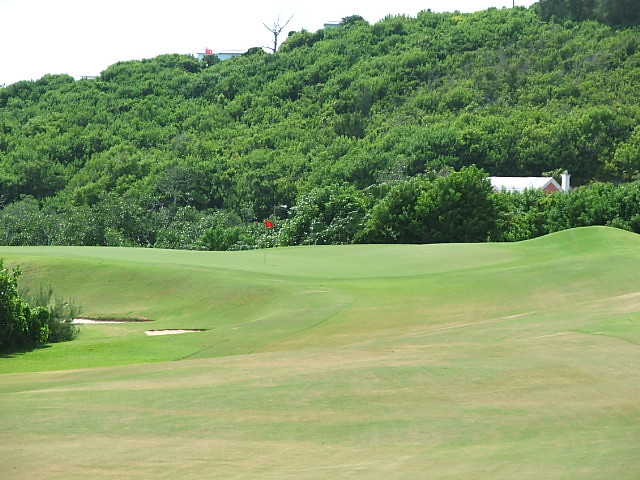 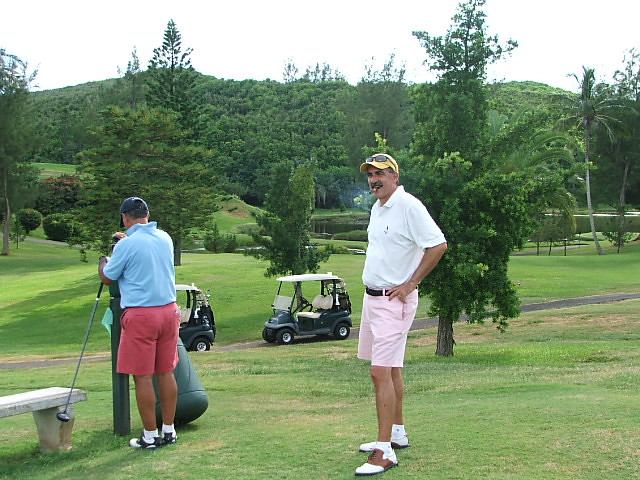 I played the Mid Ocean Club more than a dozen years ago, when I was skinnier, had black hair and many bad habits, although I did try to blend in with the natives wearing my pink Bermuda shorts

For those that can't get on the super-exclusive National Golf Links of America or Chicago Golf Club, playing Mid Ocean is a worthy substitute, since the great man's genius shows through strongly at Mid Ocean. Macdonald himself compared his Southampton baby to his work in Bermuda, "I am confident the course will stand in golfing circles as an achievement in a semi-tropical climate as great as the National Golf Links of America has been in the temperate zone." Unaccompanied guests can play Mid Ocean if their round is arranged through select hotels on the island, but play is limited. A member may introduce a guest to play golf unaccompanied on Mondays, Wednesdays, and Fridays, by reservation only.

Bermuda is a relaxing island to visit, it has a romantic charm to it and pink sand. Not surprisingly, although far from the homeland, the club itself  has a British feel to it. If you go to Bermuda it is also worth playing the course at Tucker's Point.